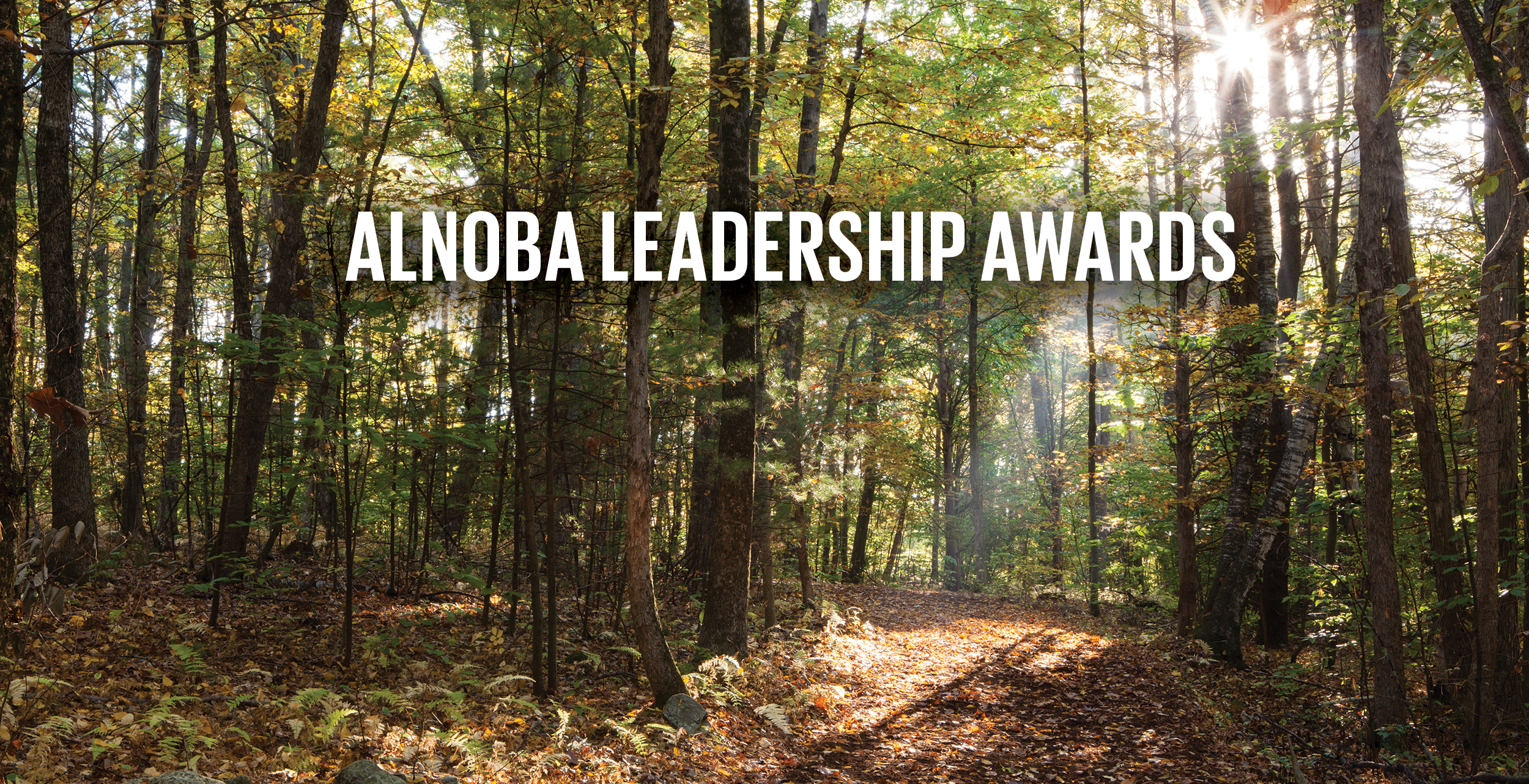 Come spend a day learning from the best and brightest in Enviromental Leadership. Choose from a variety of Teach Ins throughout the day. Topics include How Media Can Ignite Activism, Effective Advocacy for Public Lands,  and much more.

The Leadership Awards Dinner is sold out. Space is still available in the day-long training.

Climate change and other threats to our planet are real and urgent. Now, more than ever we need strong activists’ leaders to help save the earth we share. Now more than ever, we need their guts, stamina, smarts and passion. We need their example.

For more than 40 years, we have worked with some of the best leaders in the world on behalf of our beautiful planet. Last year we launched the Alnoba Environmental Leadership Awards to honor brave and brilliant leaders whose courage, wisdom or potential inspire us to act more boldly for environmental justice. Please join us in congratulating the 2019 Alnoba Leadership Award recipients. We look forward to honoring these inspiring leaders on Wednesday, October 16, 2019 at the Alnoba Leadership Awards Dinner.

Love and peace,
The Lewis Family

Presented to a visionary leader whose body of work, vision, passion and personal example have made a meaningful and measurable difference. One who has shown moral courage and willingness to go the distance to help save our planet. The recipient is known as a strong mentor and leaves a lasting legacy by the cadre of bold next generation leaders they coached. Nonprofit, public service, civic or citizen leaders are eligible.

AWARD:
$25,000 donation in recipient’s name to nonprofit of their choice.

In July of 2015, leaders from the Hopi Tribe, Navajo Nation, Ute Mountain Ute Tribe , Pueblo of Zuni, and Ute Indian Tribe founded the Bears Ears Inter-Tribal Coalition. The Coalition represents a historic consortium of sovereign tribal nations united in the effort on multiple fronts to work collaboratively to protect and promote sacred, spiritual, historical, natural, scientific and cultural resources on lands within the Bears Ears landscape. The leaders of the Coalition have shown exceptional moral courage in their advocacy for an internationally significant cultural landscape in the face of extreme opposition, racial slurs, and difficult politics. Putting aside significant differences and past tensions between tribes, these elected representatives created a movement and set an example for indigenous leaders around the United States and the world.

These leaders successfully convinced President Obama to protect 1.35 million acres of their sacred homelands and now they continue to defend their ancestral lands from attacks by the current Administration. Importantly, they’ve done all this with an intentional focus on healing and incorporating Traditional Knowledge into public land management. While many moments would have tempted lesser people to respond with cynicism or despair, these leaders have taken the “high road” and remain committed to planning so that future generations may enjoy an ecologically resilient landscape of great cultural significance.

It’s worth noting that all the leaders of the Coalition manage many responsibilities (both political and cultural) within each of their communities that require huge time commitments beyond their involvement in Bears Ears advocacy. Despite this, these leaders have given nights, weekends, and vacations to be where they had to in order to stand up for sacred lands. Whether it be meeting with the Secretary of the Interior, testifying before Congress, meeting with grassroots organizations, or conducting ceremony with the next generation of Native leaders on the Bears Ears landscape, each one of the Coalition leaders have exhibited uncommon grace and courage in the face of adversity and serve as an example to us all.

Throughout the years and through our travels, we have learned much from the teachings of indigenous people throughout the world. For 35 years, our travel companies, Overseas Adventure Travel and Grand Circle Corporation have supported indigenous people in more than 50 countries. We believe they understand our role as protectors and caretakers of the earth and community at a much different and higher level. This award honors an indigenous leader outside the U.S. who serves as a bold defender of Mother Earth, inspires communities to action and one who honors and applies traditional beliefs to the most pressing environmental problems of our day.

In 2017 Francinara Soares Martins Baré (Nara Baré) of the Baré people of Brazil, took the lead of the Coordinating Body of Indigenous Organizations from the Brazilian Amazon (COIAB), one of the largest indigenous organizations in South America.  She represents 75 organizations, 160 peoples and more than 400,000 indigenous people in 9 states.  She leads  at a critical point when indigenous peoples and the Amazon face immense threats, including the current government’s aggressive campaign to open the Amazon to exploitation.

Nara Baré not only continues the challenging fight of indigenous peoples in problematic political times, but she is paving way for indigenous women to meaningfully participate in this fight. By successfully leading an indigenous organization that is 80% male, Nara contributes to the rise and empowerment of indigenous women not only in Brazil, but in South America and beyond. She knows that indigenous women are vital to preserve the culture and traditional knowledge of their people and to educate future generations.

This award recognizes achievement and potential. It is presented to an extraordinary person under 40 who has shown grit, leadership, integrity and results on behalf of the environment and sustainability. The recipient demonstrates the entrepreneurial spirit and started, founded, or invented an innovative organization, service or product that has measurably made a difference.

Steph Speirs thinks about solar the way one might think about a community garden. Why go through the trouble of planting panels on your roof when you could instead plug into a shared neighborhood resource to access financial savings? She co-founded and runs Solstice, a social enterprise dedicated to radically expanding the number of American households who can take advantage of clean energy using community-shared solar farms.

Solstice’s financial and policy tools, including their unique EnergyScore underwriting metric, open scalable paths to inclusion for renters, low-credit households, and other Americans that have been left out of the clean energy transition. Their community organizing techniques and technology platform further make it easy for everyday Americans to access clean energy for the first time.

Steph is a Techstars alum and was selected as an Echoing Green Climate Fellow, a Global Good Fund Fellow, a Kia Revisionary, a Renewable Energy World 40 Under 40 in Solar, a Grist 50 Fixer, a GLG Social Impact Fellow, a Cordes Fellow, and an Acumen Global Fellow.

She holds a B.A. from Yale, a Master in Public Affairs (MPA) with distinction from Princeton, and an MBA from MIT with a Certificate in Entrepreneurship and Innovation. She originally hails from Hawaii.

The CEO Environmental Leadership Award is established to support, inspire and recognize business leaders who help save the earth we share. The vision is for the award to increase action towards a more sustainable future through the recipient’s continued leadership within his or her business, industry and community.

When you look for heroes, you should always look in your own backyard. When we saw Matt’s nomination come through it made perfect sense to us to honor someone who blazed the trail in New England for Passive House design and who is now redefining the sustainable design industry.

In 2013, we gave Matt a seemingly impossible task – transform a set of New England meeting house timber frames into a Passive House standard building.  Calm and unfazed Matt set about to design Alnoba to be the first passive house standard building of its kind in the Northeast, which uses 75-90% less energy and blends 19th century craftsmanship with 21st century green technology.

He is an award-winning architect and become a leader in Passive House design in the U.S. and speaks internationally on sustainable design.  He co-founded GO Logic, a design/build firm that is focused on developing a practical, cost effective approach to meeting the ultra-high-performance Passive House standard, which use 90% less energy in space heating when compared to traditional buildings. Their first project, the GO Home became the 1st certified Passive House building in Maine.  Next he went on to found GO Home, which provides pre-designed, prefabricated, homes for New Englanders, which also use 90% less energy.  This spring he launched OPAL, an architecture firm that is focused on creating the next generation of large scale passive house, carbon-positive buildings.

Believing a ‘well insulated home can change the world’, Matt launched his latest venture, GO Lab, which will help transform the forest products economy by creating a manufacturing facility in a former paper mill in Madison, Maine.   It will turn daily shipments of wood chips from Maine’s lumber yards into affordable, sustainable insulation and create good paying jobs.

Knowing that buildings produce 44% of carbon emissions, GO Lab believes that “the survival of the planet is at risk unless critical industries change the way they do business.” According to Matt, “It is my responsibility as an architect to create buildings that not only meet current performance standards, but also anticipate future standards and contribute to the well-being of future generations.”  He has spent his career rethinking every detail of building construction, with an eye toward high performance, quality, and sustainability.   He is an architect, entrepreneur and visionary leader.