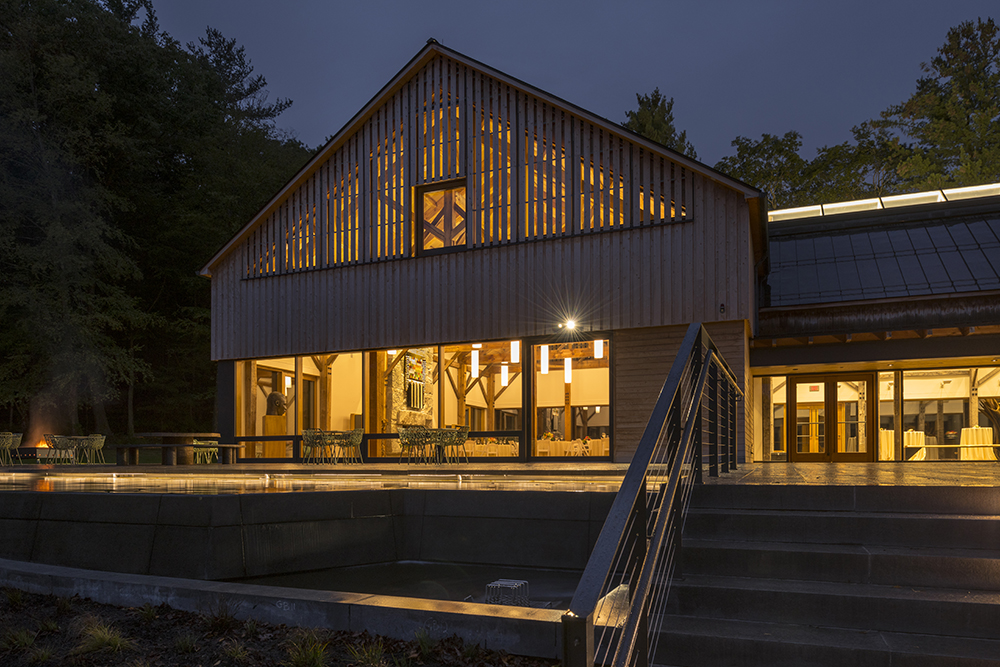 In 2016, we opened Alnoba as a gathering place to share, learn, celebrate and transform. It is where 19th-century timber framing methods meet 21st-century green architecture. It is the first Passive House Standard-certified building of its type in New England, built to reduce energy usage by 75-95% over similar structures. Parts of Alnoba are 300-year-old reclaimed timbers, and other timbers come from trees that once stood in its place. The result is an innovative blend of craftsmanship and conservation. This 14,000-square-foot building includes the main meeting room, gallery, state-of-the-art media room, meditation space, screened porch and several outdoor seating areas. 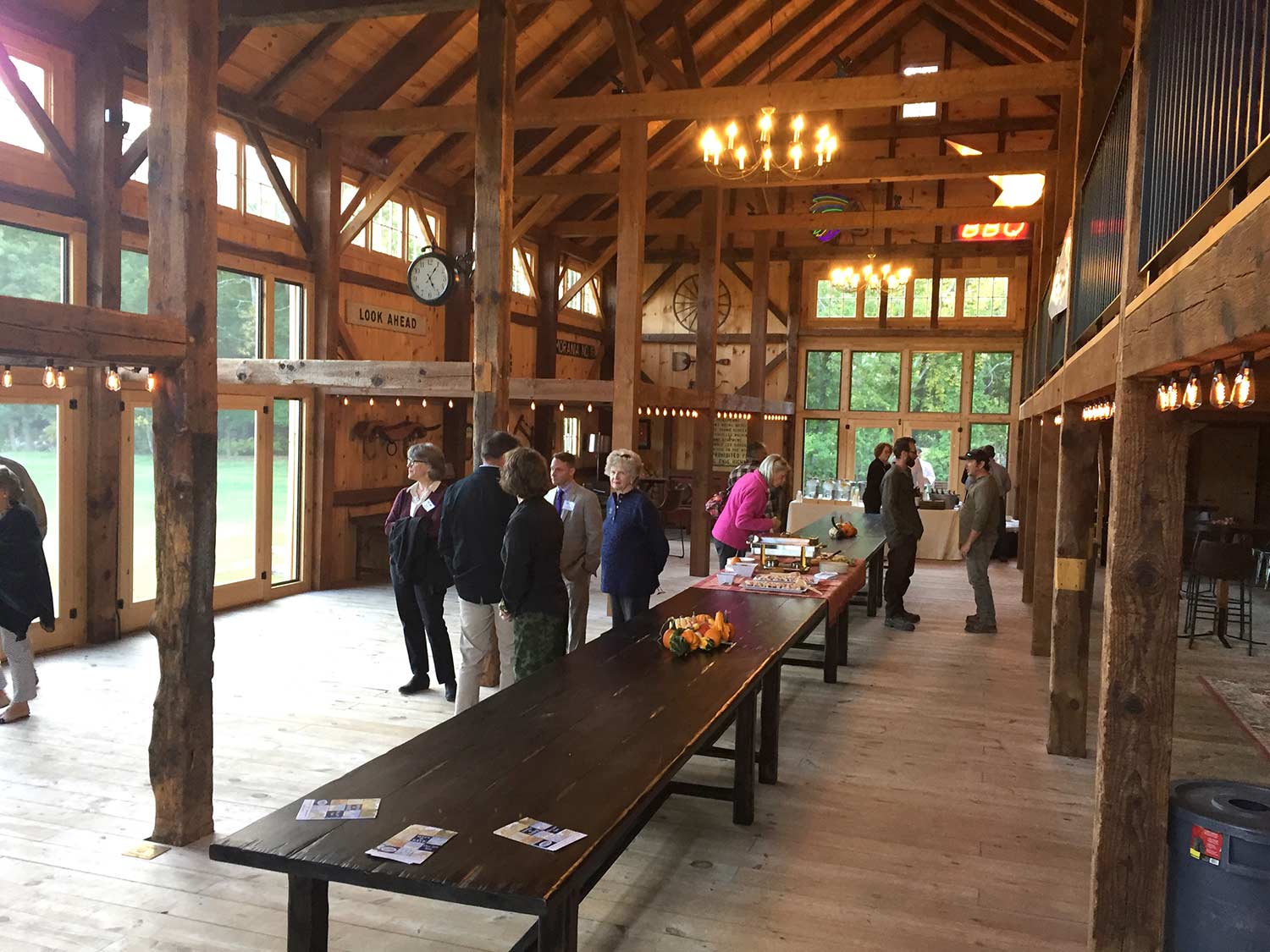 Alnoba’s newest addition is a lovingly restored New England barn, built in 1848. Originally located on Bay Road in Greenland, New Hampshire, and slated for demolition, the barn was reconstructed on the banks of Charward Pond. This rustic barn has two large doors, which can open to the pond, and is available for meetings and special events. 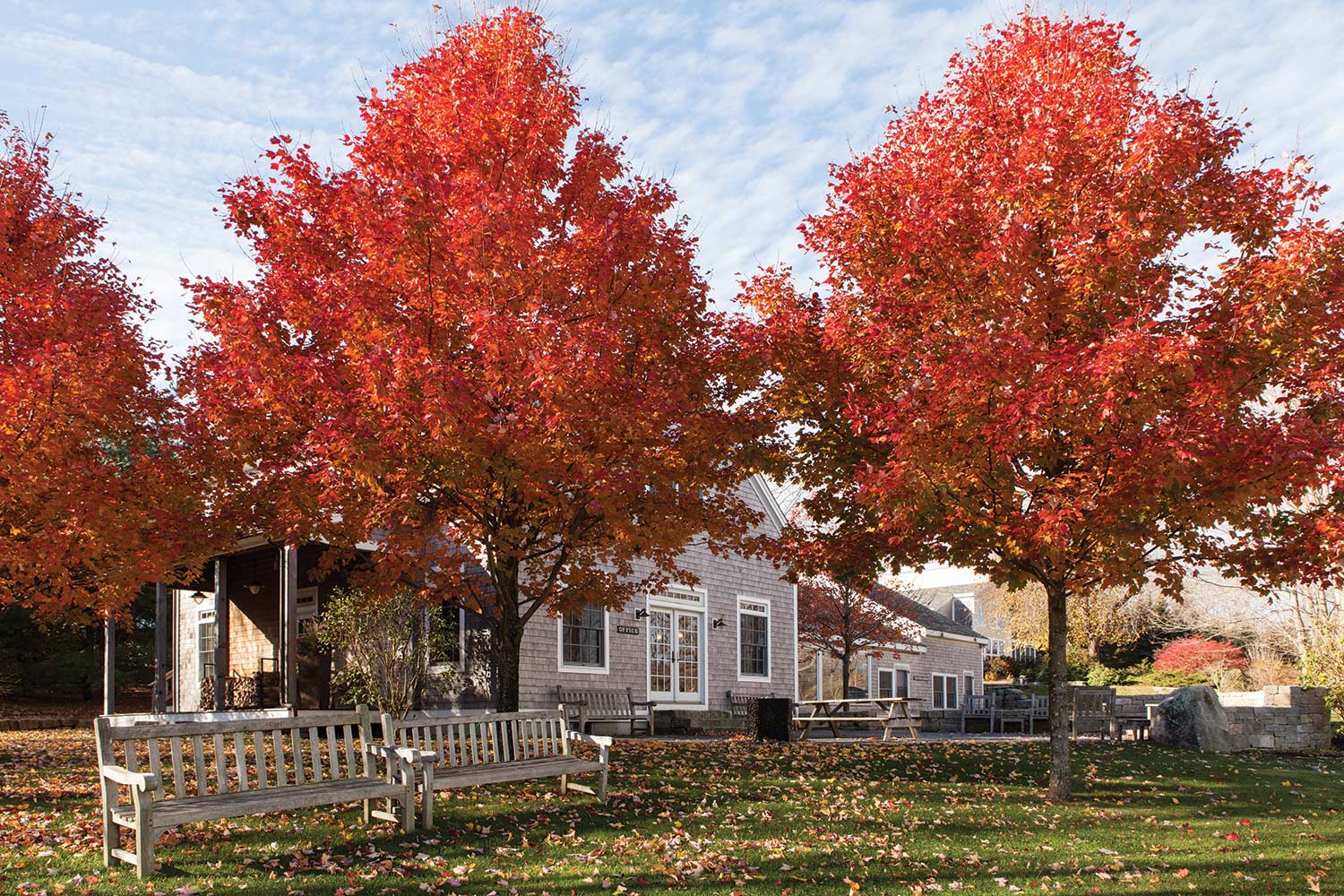 The Pinnacle Leadership and Team Development office was built as an addition to the original artist’s studio across from the Charward residence. Using natural materials of stone and wood, the office provides an indoor meeting space, as well as an outdoor gathering place circling a granite fire ring. Can accommodate groups up to 40. 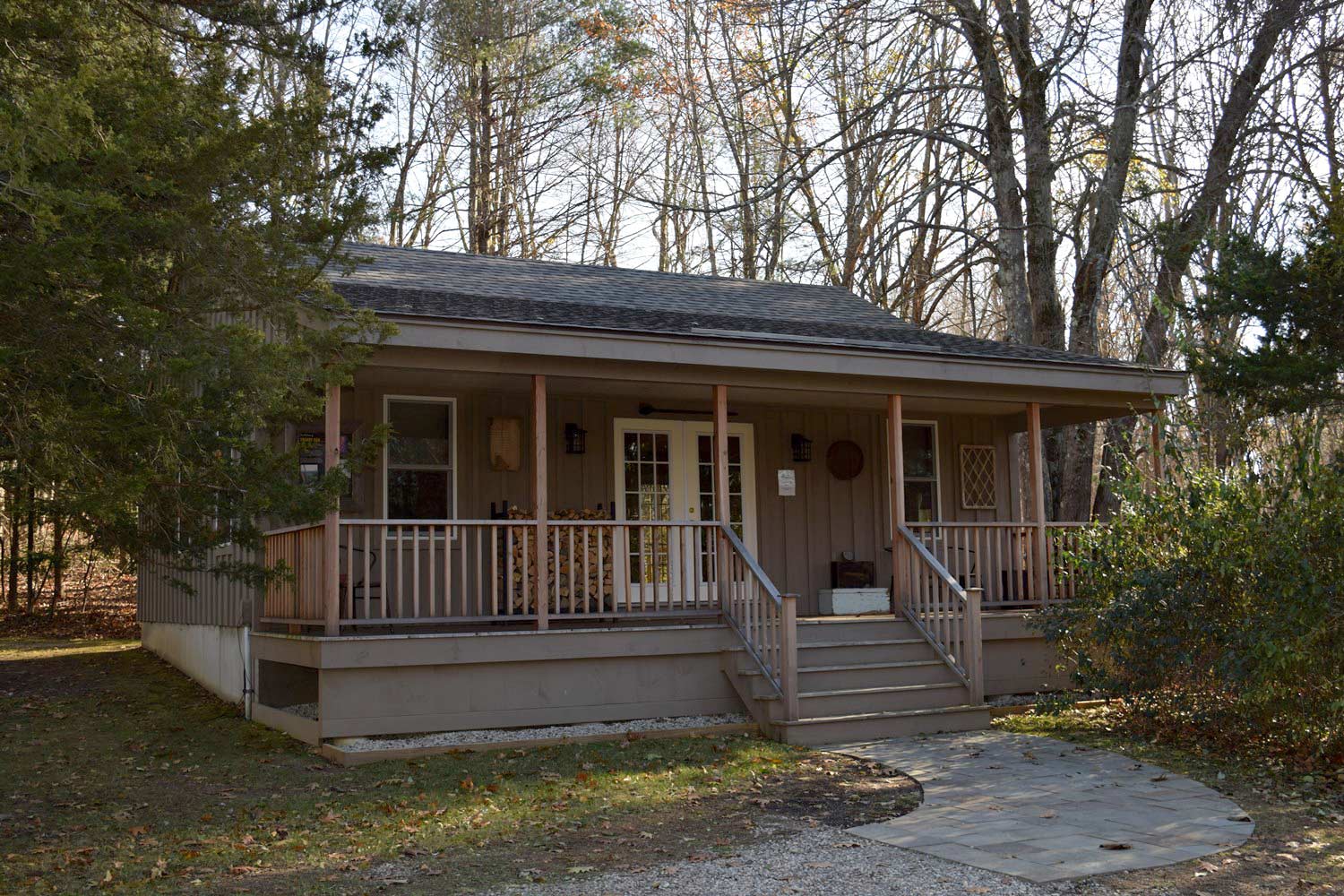 Locally known for years as Brandy Run, the meeting house sits adjacent to an old airstrip and small pond. It neighbors the Briggs House. Can accommodate groups up to 20. 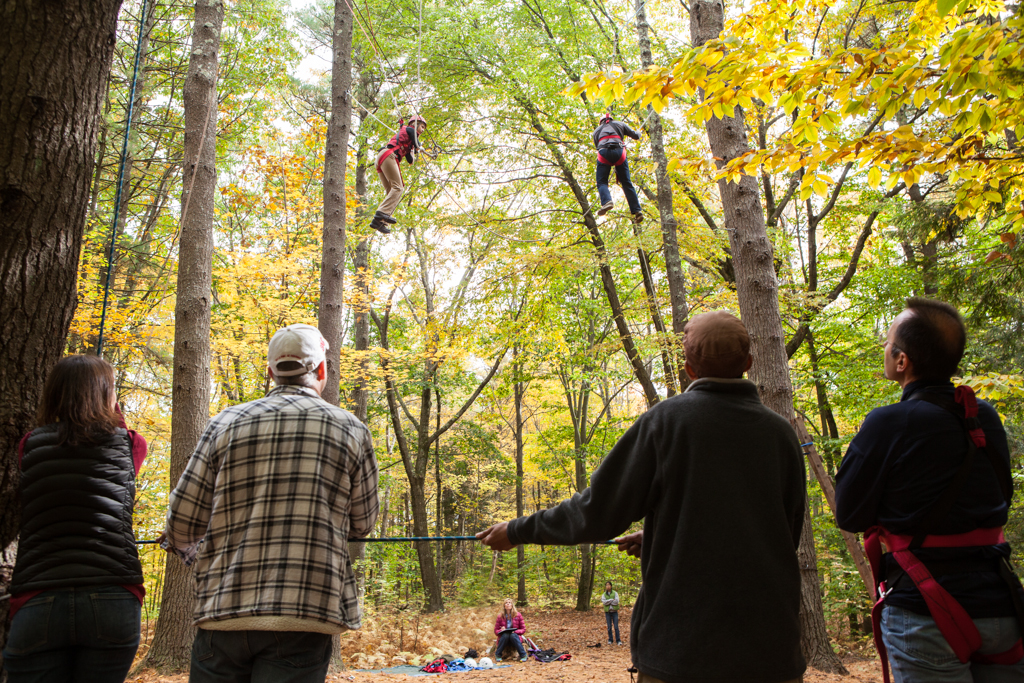 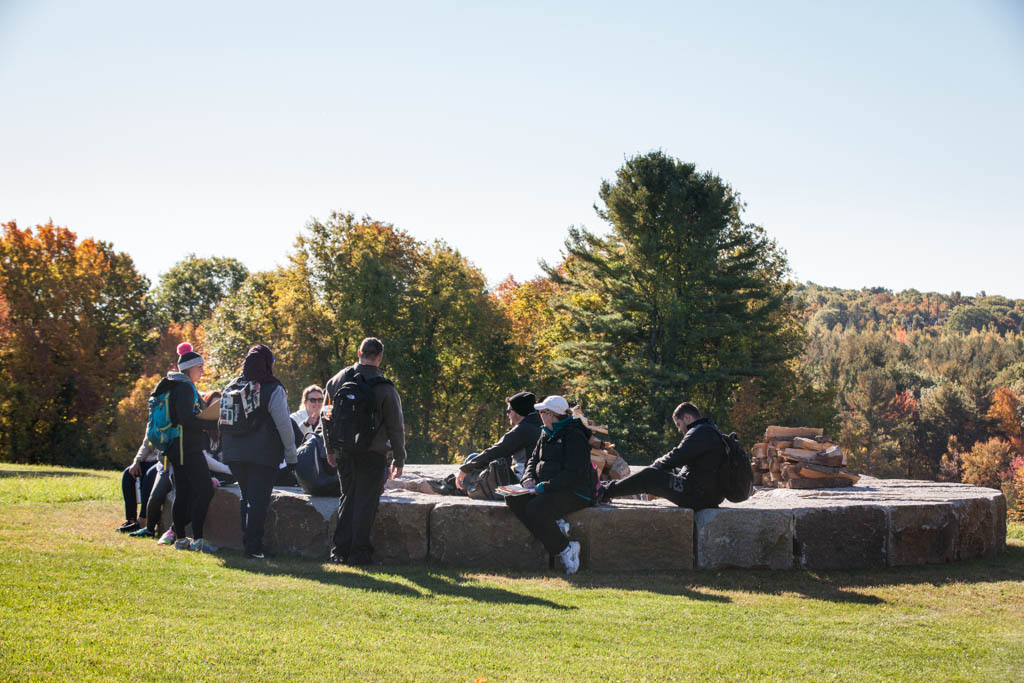 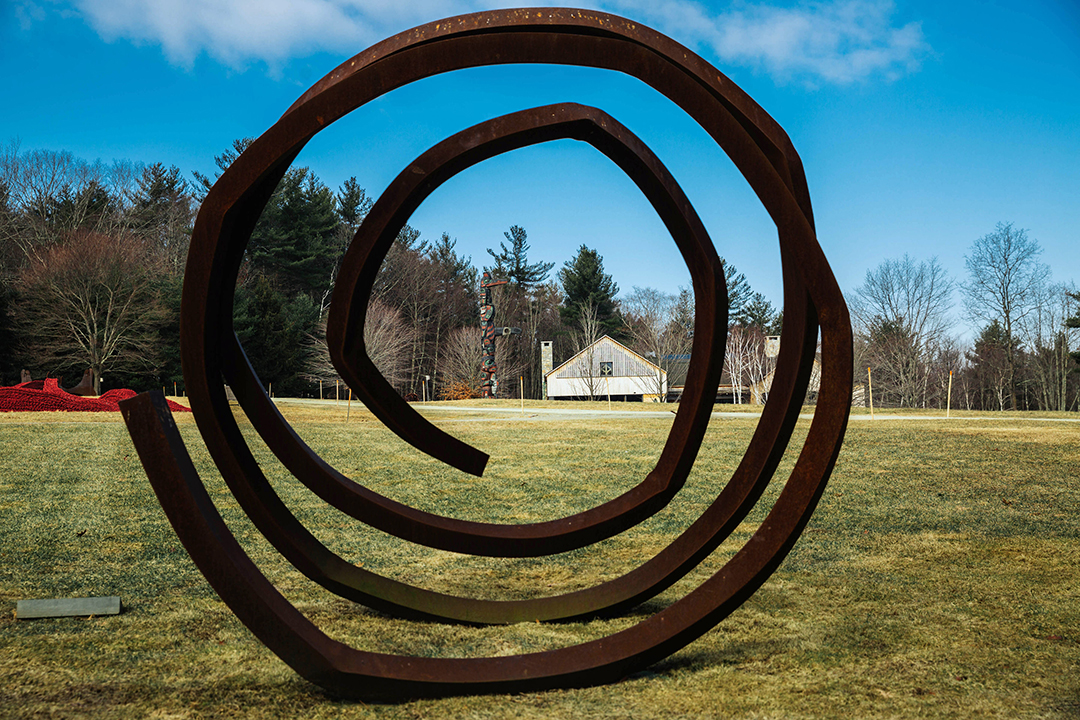 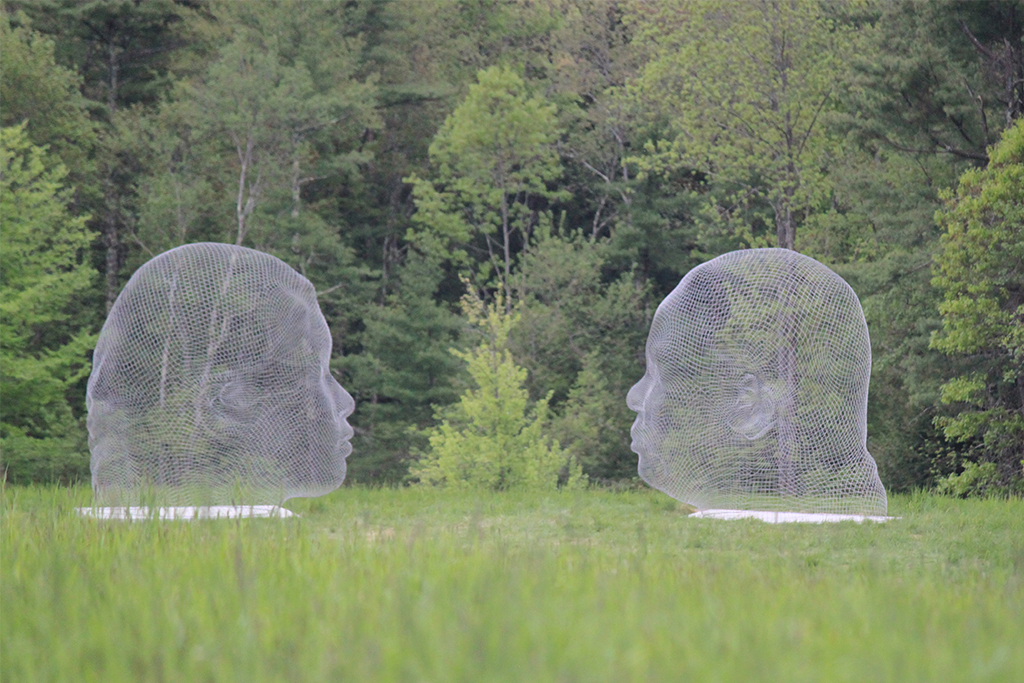 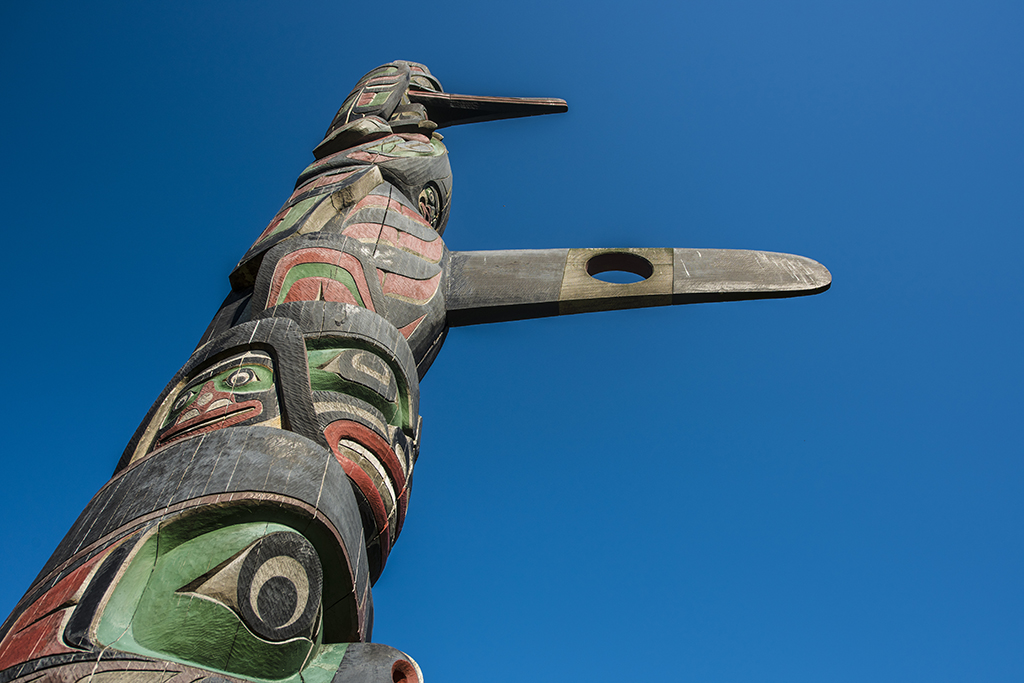 TRAILS Ten miles of marked trails wind through the 400 acre property for easy to moderate hikes. They will take you through ancient forests, wildlife habitats, meadows and marshes and aside brooks and ponds. All trails have benches and reading stones for visitors to rest and reflect.

LEADERSHIP BENCHES We believe you can lead from anywhere and are inspired by everyday courageous leaders who make a difference. Nearly 200 benches sit trailside, aside fields, ’neath trees and on the shores of the ponds named in honor of a leader and inscribed with their words.

READING STONES New Hampshire is the Granite State. At trailheads and transitional spaces, such as where forest meets field, we placed large stones from her quarries inscribed with readings from people we admire.

GATHERING CIRCLES We believe some of the best conversations occur in circles, where everyone has a place. Several Gathering Circles dot the property—some around fire pits, others tucked in groves and some on the water’s edge. These are ideal for team talks and debriefs or for friends and family to share moments together.

ROPES AND AERIAL COURSES Our professional ropes course is a challenging outdoor personal development and team-building activity consisting of eight different elements that are constructed in trees and utilize a belay system. The Adventure Aerial Park is a 140-foot, state-of-the-art, 20-element ropes course. The imaginative design of this course utilizes self-belay lanyards, allowing 30 or more individuals to move independently through the course. These courses are ideal opportunities for risk taking, overcoming challenges, working together and creative problem solving.

SCULPTURES  When we first thought about bringing art to Alnoba, we envisioned a place where visitors could enjoy art and nature together. We believe nature is the greatest artist and have looked for artworks that make us stop and think about our surroundings. Many represent causes we have dedicated our lives to, such as social and environmental justice and protecting indigenous cultures.

We hope these works spark creativity and inspire new thinking by bringing together art from around the world. Our collection is international and eclectic. It includes masterworks by Andy Goldsworthy, Orly Ganger, Jaume Plensa, John Lopez, Allan Houser and Ursula von Rydingsvard.

Some pieces come from our travels, others from chance encounters with the artist and some we sought out after reading their story. We choose each piece because it makes me feel something … joy, sadness, discomfort or calm.

Most important, we encourage visitors to take a break outdoors—disconnect from our devices, reconnect with the land and hopefully get a bit more inspired to help save this earth we share. During your stay, please wander through our forests, fields and paths and enjoy the smells, textures and feeling of the outdoors.

Living Gently on the Land 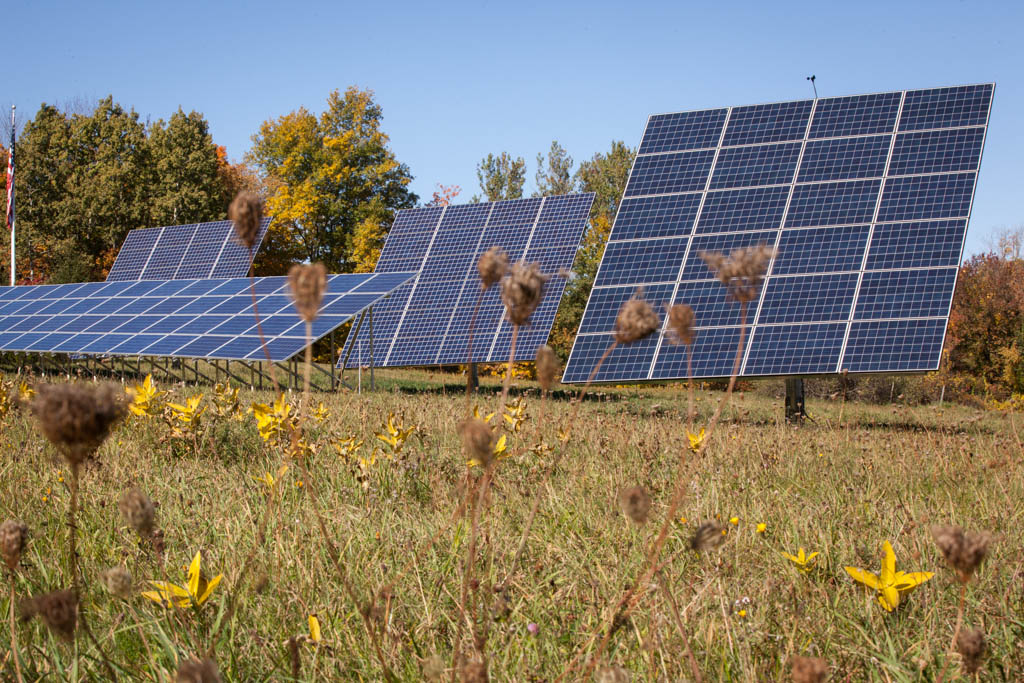 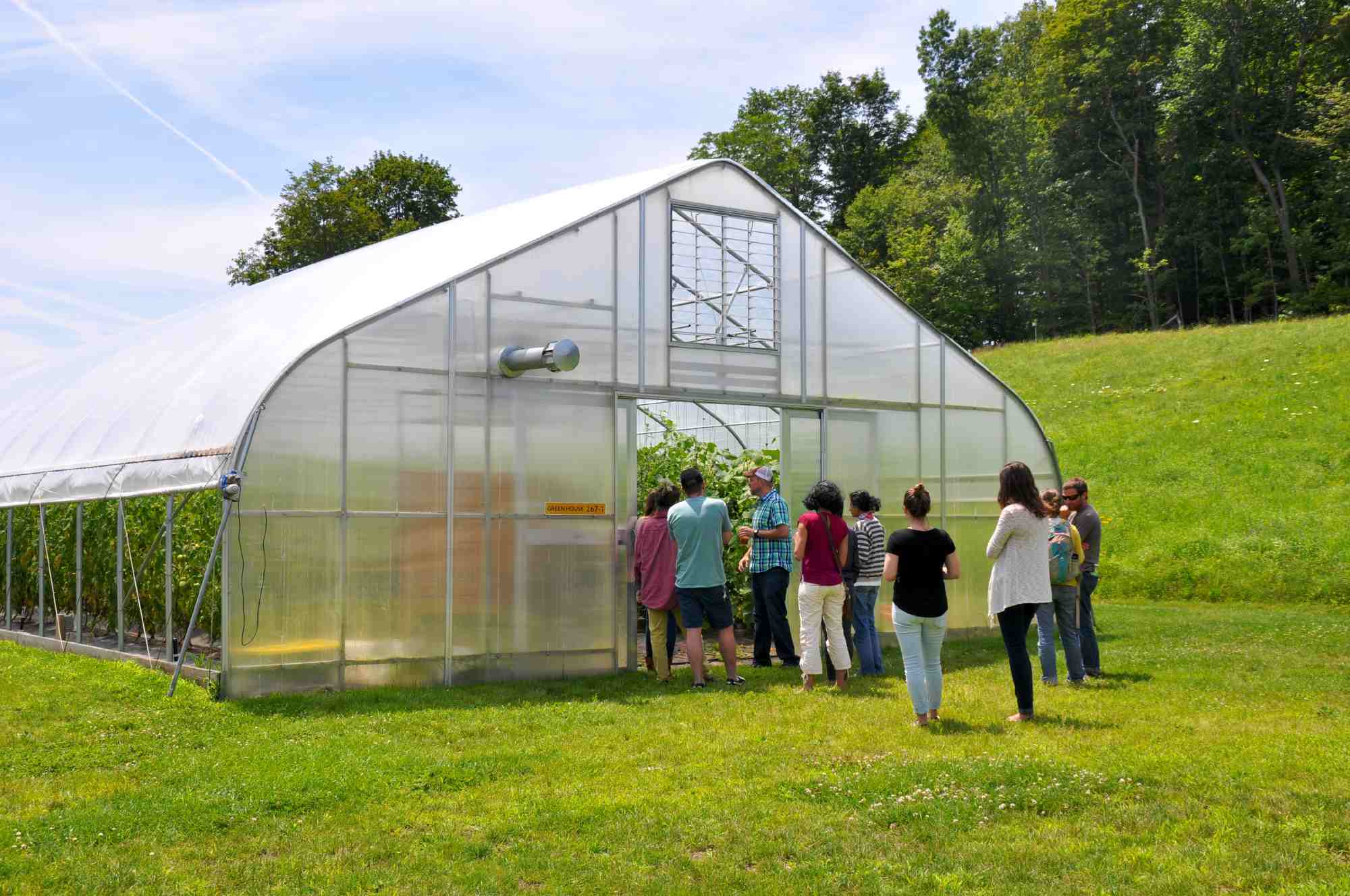 Our goal is to be 100% renewable energy and net zero across property by 2023. Alnoba commits to the preservation of our natural resources and surroundings. We continuously update and execute green practices and policies, which include:

HIRE LOCAL PEOPLE, SERVE LOCAL FOOD AND SOURCE NATIVE MATERIALS WHENEVER WE CAN: We try to hire and buy as local as possible. Not only does this help neighbors and community, it keeps shipping costs and fuel consumption down. At the Farm nearly 85% of products are grown or produced in New Hampshire or onsite.

POWERED BY THE SUN – with solar installations at the Farm and Pinnacle all non Farm buildings are powered by solar energy. Our wood chip boiler heads the Food Barn greenhouses with wood vs. propane

NO PLASTIC BOTTLES ON SITE: We provide two water stations from deep wells.

TRANSPORTATION: Fleet of Electric cars for transport across property

COMPOSTING: The industrial composter at the Farm helps us to reduce our organic waste by more than 90% and produces rich compost for use in our greenhouses

GREEN PRODUCTS, BUILDING AND PURCHASING: In new development and remodeling we strive to have the least impact to the environment. Examples include energy efficiency lighting and composting or low flush toilets. Alnoba’s main building uses geothermal energy to heat and cool. We try to minimize packaging materials and use recycled or compostable materials.

Alnoba: The Land, Wildlife and Habitats

The Art of Alnoba starts with the land.

View a Map of Our Site 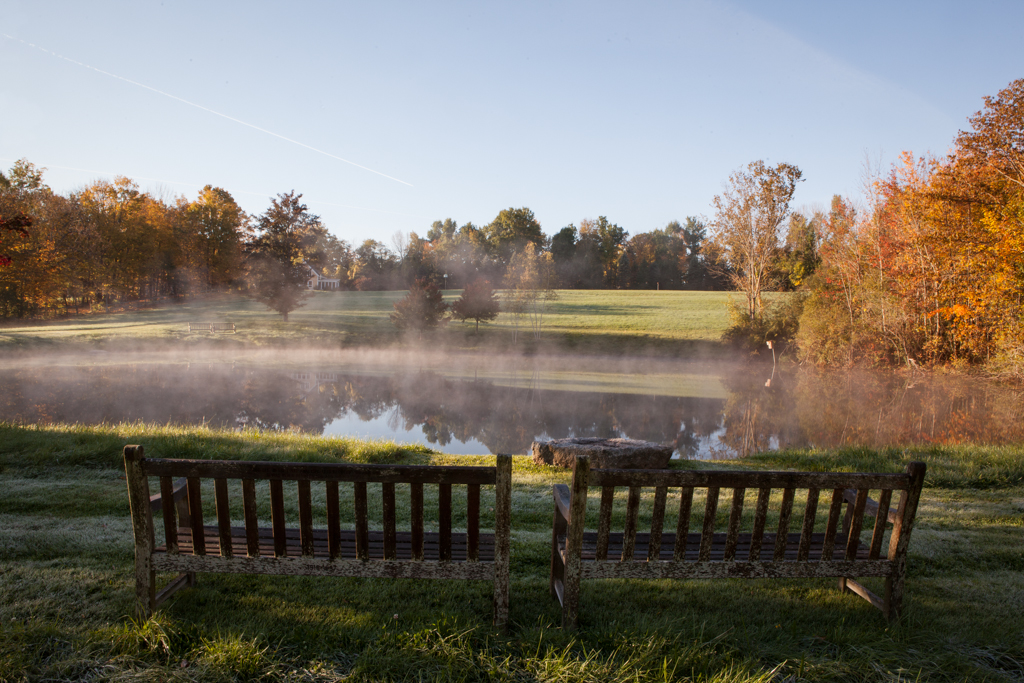 Alnoba’s rolling landscape was shaped more than 10,000 years ago by the glacier flow to the sea. The mile-high sheet of ice formed the two hills that dominate the upland areas. Known as drumlins, these elongated hills are generally in the shape of an inverted spoon or half-buried egg. Alnoba is home to many diverse plants and animals with nearly 200 species of birds, more than 30 species of mammals and 30 species of reptiles, amphibians and fish.

FORESTS – Forests in the Kensington area began recolonizing old fields as farming declined between 1870and 1890. Second-growth forests were subsequently cut over for pulpwood through the 1930s and ’40s. Today, some 80 years later these forests are now reaching maturity. They are dominated by White Birch, American Beech, Northern Red Oak, White Ash, Sugar Maple and Red Maple trees mixed in with groves of old- growth hemlock and super-dominant white pines. Some of the rare species of woodland plants for this area include Atlantic White Cedar, Black Gum, American Chestnut, Hop Horn Beam/Ironwood, Mountain Laurel and Yellow Lady’s Slipper

FIELDS–  Alnoba’s fields are mowed once a year in the early fall to allow grassland birds like the Bobolink and Bluebird to nest and rear offspring. Those fields also promote the growth of dozens of species of wildflowers, which provide nectar for pollinating butterflies, moths and bees.

Muddy Pond is the only naturally occurring water body in the town of Kensington. It is now surrounded by an extensive floating mat where rare plants have been found and extensive stands of stunted Atlantic White Cedar trees grow. Winkley Brook supports a healthy population of rare Red-finned Pickerel, and it supplies important spawning habitat for native Brook Trout. Tiny, worm-sized American Eels, born in the Sargasso Sea near Bermuda, incredibly find their way to the New Hampshire seacoast. It also provides an important travel corridor for the rare Spotted and Blanding’s Turtles. Marshes and Swamps serve important wetland roles as natural floodwater and silt detention sites—and water purification basins. They are also critical habitat for breeding and migrating Wood Ducks, Willow Flycatchers, Virginia Rails and Swamp Sparrows.