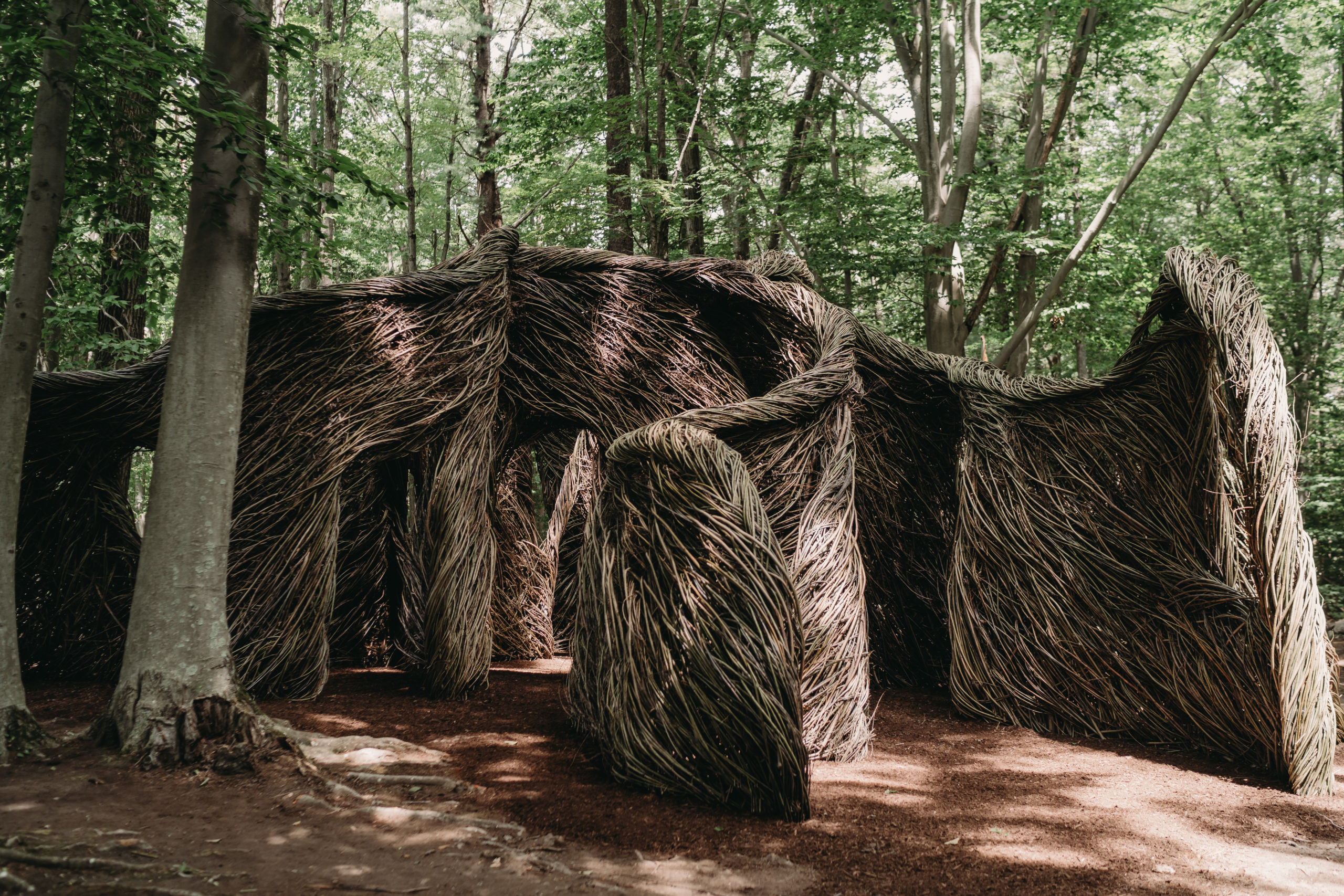 Patrick Dougherty and the shape of enchantment

In the magical forest that is Alnoba in the community of Kensington, the wizard of willow cast his spell. Patrick Dougherty, a sculptor of international acclaim, sank New Hampshire maple saplings into the fragrant earth and around them twisted green branches from a New York willow farm. The result is a structure of wonder and delight nestled in a sacred grove… or at least a spot where wild things are.

Child’s play, shelters built by animals, wattle and daub, wicker and twig furniture are just some of the things that come to mind to describe a Dougherty sculpture.

The grove in question is actually an old camping site on the grounds of Alnoba. “Wildwood” by Patrick Dougherty is yet another embellishment on a hugely ambitious, artistic cake that is the Alnoba art collection, which includes pieces by such luminaries as Andy Goldsworthy, Jaume Plensa and Orly Genger. Harriet Lewis says her goal is to “place art outside to get people into nature.” The collection is beautiful, humorous and humbling.

Requiring a two-year lead-time just to get on his calendar, Dougherty’s sculpture starts with a site visit and a basic plan that morphs through improvisation. Each sculpture has three givens: it must be built on site; it can’t be transported; and it is subject to wear and tear. “I unify the whole thing,” said Dougherty, “But once the team gets going, progress is a one-way street.” Working eight hours a day during a three-week residency, Dougherty’s schedule allows him to complete roughly ten sculptures each year.

Each sculpture is adapted to the scale of its site and starts with a footprint on the ground outlined with extension cords. At Alnoba, that footprint covered a circle about 60 feet in diameter. With a Southern accent that betrays his North Carolina roots, Dougherty describes his work as “down to earth.” No pun intended. At Alnoba the sculpture is organized around a bent core that creates a sense of motion. The sculpture is finished with stickwork (a term he coined to describe the practice of his work) that bolsters leading lines. The tendency of the branches to tangle provides the simplest method of joinery. Its weave seems to weave a spell. Despite a multitude of doors and windows, the counterclockwise twisting lends the work an air of being not-manmade, as if the sculpture has grown from the ground by itself to be “a lair for feral children or wayward adults.”

A Dougherty sculpture is created in three phases. The first phase is to “layer up,” to give the structure “enough height to hold its own on the site.” At Alnoba, Dougherty’s team dug 100 holes two feet into the ground into which more than 300 saplings and a few steel posts were sunk into lay a stable foundation.

The next phase is a “structural weave” that conveys a “sense of movement.” In this case, the layering up and weave create a barrel chamber 16 feet high, open to the canopy of trees. It is an eye of calm in the center of a vortex with multiple arms branching out in a counterclockwise motion. Dougherty describes the work as “spun among the trees.” One senses from overhead, the sculpture must look a little like a hurricane on a weather map.

The third step Dougherty calls “an applique,” a process that improves the surface of the work and mixes clipping and weaving to make the surface safe to touch. It improves the sculpture’s sense of flow. Finally the ground is leveled and covered with a carpet of mulch. The willow remains supple for just one week. Its distinctive tang fades from the air as it starts to turn a blackish brown, highlighted with touches of red. Dougherty returns to the site about a week after the initial construction, to work over the surface and tweak its style.

Unlike true enchantment, Dougherty’s work fades with time. Savaged by New Hampshire winters, Alnoba’s sculpture will start to decline after two years. Eventually it will be removed. In Daniel Houghton’s 2008 video about the artist, So Inclined, Dougherty discusses the temporal quality of his work: “It takes a finite time to produce, and it has a finite life. Then you have to commit it to memory.”

With modesty he adds, “Art history has to look after itself. And artists are best served by making whatever it is that they thought was relevant to their life and seemed to be relevant to their viewers, and let the rest of it hang.” Dougherty likes to spin wood into artistic gold. Rumpelstiltskin, move over.

Lesley Morgan is Alnoba’s lead art tour docent, training and orienting all our new volunteers. She is a juried member of the New Hampshire Art Association and retired art educator with a passion for adventure travel.